What does it look like when an ideology dies? As with most things, fiction can be the best guide. In Red Plenty, his magnificent novel-cum-history of the Soviet Union, Francis Spufford charts how the communist dream of building a better, fairer society fell apart.

Even while they censored their citizens’ very thoughts, the communists dreamed big. Spufford’s hero is Leonid Kantorovich, the only Soviet ever to win a Nobel prize for economics. Rattling along on the Moscow metro, he fantasises about what plenty will bring to his impoverished fellow commuters: “The women’s clothes all turning to quilted silk, the military uniforms melting into tailored grey and silver: and faces, faces the length of the car, relaxing, losing the worry lines and the hungry looks and all the assorted toothmarks of necessity.”

But reality makes swift work of such sandcastles. The numbers are increasingly disobedient. The beautiful plans can only be realised through cheating, and the draughtsmen know it better than any dissidents. This is one of Spufford’s crucial insights: that long before any public protests, the insiders led the way in murmuring their disquiet. Whisper by whisper, memo by memo, the regime is steadily undermined from within. Its final toppling lies decades beyond the novel’s close, yet can already be spotted.

When Red Plenty was published in 2010, it was clear the ideology underpinning contemporary capitalism was failing, but not that it was dying. Yet a similar process as that described in the novel appears to be happening now, in our crisis-hit capitalism. And it is the very technocrats in charge of the system who are slowly, reluctantly admitting that it is bust.

You hear it when the Bank of England’s Mark Carney sounds the alarm about “a low-growth, low-inflation, low-interest-rate equilibrium”. Or when the Bank of International Settlements, the central bank’s central bank, warns that “the global economy seems unable to return to sustainable and balanced growth”. And you saw it most clearly last Thursday from the IMF.

It is the very technocrats in charge of the system who are slowly, reluctantly admitting that it is bust

What makes the fund’s intervention so remarkable is not what is being said – but who is saying it and just how bluntly. In the IMF’s flagship publication, three of its top economists have written an essay titled “Neoliberalism: Oversold?”.

The very headline delivers a jolt. For so long mainstream economists and policymakers have denied the very existence of such a thing as neoliberalism, dismissing it as an insult invented by gap-toothed malcontents who understand neither economics nor capitalism. Now here comes the IMF, describing how a “neoliberal agenda” has spread across the globe in the past 30 years. What they mean is that more and more states have remade their social and political institutions into pale copies of the market. Two British examples, suggests Will Davies – author of the Limits of Neoliberalism – would be the NHS and universities “where classrooms are being transformed into supermarkets”. In this way, the public sector is replaced by private companies, and democracy is supplanted by mere competition.

The results, the IMF researchers concede, have been terrible. Neoliberalism hasn’t delivered economic growth – it has only made a few people a lot better off. It causes epic crashes that leave behind human wreckage and cost billions to clean up, a finding with which most residents of food bank Britain would agree. And while George Osborne might justify austerity as “fixing the roof while the sun is shining”, the fund team defines it as “curbing the size of the state … another aspect of the neoliberal agenda”. And, they say, its costs “could be large – much larger than the benefit”. 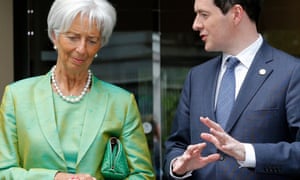 IMF managing director Christine Lagarde with George Osborne. ‘Since 2008, a big gap has opened up between what the IMF thinks and what it does.’ Photograph: Kimimasa Mayama/EPA

Two things need to be borne in mind here. First, this study comes from the IMF’s research division – not from those staffers who fly into bankrupt countries, haggle over loan terms with cash-strapped governments and administer the fiscal waterboarding. Since 2008, a big gap has opened up between what the IMF thinks and what it does. Second, while the researchers go much further than fund watchers might have believed, they leave in some all-important get-out clauses. The authors even defend privatisation as leading to “more efficient provision of services” and less government spending – to which the only response must be to offer them a train ride across to Hinkley Point C.

Even so, this is a remarkable breach of the neoliberal consensus by the IMF. Inequality and the uselessness of much modern finance: such topics have become regular chew toys for economists and politicians, who prefer to treat them as aberrations from the norm. At last a major institution is going after not only the symptoms but the cause – and it is naming that cause as political. No wonder the study’s lead author says that this research wouldn’t even have been published by the fund five years ago.

From the 1980s the policymaking elite has waved away the notion that they were acting ideologically – merely doing “what works”. But you can only get away with that claim if what you’re doing is actually working. Since the crash, central bankers, politicians and TV correspondents have tried to reassure the public that this wheeze or those billions would do the trick and put the economy right again. They have riffled through every page in the textbook and beyond – bank bailouts, spending cuts, wage freezes, pumping billions into financial markets – and still growth remains anaemic.

And the longer the slump goes on, the more the public tumbles to the fact that not only has growth been feebler, but ordinary workers have enjoyed much less of its benefits. Last year the rich countries’ thinktank, the OECD, made a remarkable concession. It acknowledged that the share of UK economic growth enjoyed by workers is now at its lowest since the second world war. Even more remarkably, it said the same or worse applied to workers across the capitalist west.

Economists don’t talk like novelists, more’s the pity, but what you’re witnessing amid all the graphs and technical language is the start of the long death of an ideology.