Hannah Arendt, who died in 1975, was a prolific and unclassifiable thinker, a political theorist, moral philosopher and polemicist of unmatched range and rigor. At least outside academic circles, her posthumous fame — or notoriety — rests on “Eichmann in Jerusalem,” a piece of extended reportage she wrote for The New Yorker in 1963, and on a single phrase associated with it: the banality of evil.

Those words are evoked so often, and in so many contexts, that their specific and controversial original meaning is easily forgotten. Arendt, attending the war crimes trial of Adolf Eichmann, a high-ranking Nazi captured in Argentina by Israeli operatives, was struck by his ordinariness, the bland bureaucratic demeanor seemingly at odds with the enormity of his crimes. Though later research has suggested that Arendt misjudged Eichmann — who was, for one thing, a much more ardent anti-Semite than he seemed to be, sitting in the dock — the idea that great horror can spring from mundane roots has proved tenacious and perpetually relevant.

“Vita Activa: The Spirit of Hannah Arendt,” a vigorous and thoughtful new documentary by Ada Ushpiz, frames its inquiry into Arendt’s career with her encounter with Eichmann. But its focus is much wider than the still-potent debate over “Eichmann in Jerusalem,” which was widely and fiercely attacked for what critics took to be its trivialization of Eichmann’s deeds and its lack of sympathy for his victims. Though both Arendt’s defenders and detractors are heard from, Ms. Ushpiz’s film situates the Eichmann episode within a broad and rich portrait of an intellectual determined to use the tools of rationality to comprehend historical events that seem to defy all reason.

The title insists, as Arendt herself always did, that thinking is a form of action. The “spirit” conjured — through Arendt’s own words, the recollections of students, disciples and friends, and carefully chosen archival images — is one of relentless and passionate mental activity. Ms. Ushpiz is determined to rescue her subject from the banality of biography. The details of Arendt’s childhood, education, romantic life and professional activity are not ignored, but they nearly always illuminate her ideas. 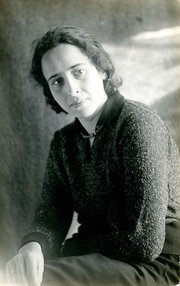 A photograph of Hannah Arendt in her youth, in the film “Vita Activa.” Credit: Zeitgeist Films

Arendt was born into an assimilated German-Jewish family in 1906. Her early association with the philosopher Martin Heidegger — she was his lover as well as his student — has been another source of controversy, given his subsequent collaboration with the Nazis and their racial policies. Arendt herself fled Germany in 1933, and much of her subsequent writing wrestles with the lethal contradictions of a homeland that seemed by turns to represent the pinnacle of civilization and the depth of barbarism.

“The Origins of Totalitarianism,” her 1951 tour de force, represents her most sustained attempt to understand German fascism and Soviet Communism not as metaphysical catastrophes but as political developments, as aspects of modernity rather than as horrific exceptions to its progress. Recent scholarship has challenged some of her arguments, but the analytic framework of the book remains powerful and disconcertingly topical.

“Vita Activa,” while it will surely satisfy and provoke students of 20th-century intellectual history, feels more urgent than most documentaries of its kind. Some of Ms. Ushpiz’s methods are a little questionable — I was bothered by the way she slipped artificial, ambient sound into silent footage — but she shows impressive coherence and fair-mindedness in her approach to Arendt, succumbing neither to hagiography nor to facile skepticism. Instead, she subtly draws the viewer’s attention from the past to the present, using judiciously chosen passages from Arendt’s letters and published work.

Two insights stand out in painful relief. The first is Arendt’s contention that the lethally dehumanizing logic of totalitarianism originated partly in the massive displacement of populations after World War I. The refugees created by that conflict were not only stateless but “rightsless,” regarded by the nations of Europe not as citizens in need of protection but as a problem to be solved. A century after that war, Europe is again in the midst of a refugee crisis, the political consequences of which are not yet fully known.

Arendt was also concerned with the ways certain totalitarian tendencies and attitudes could persist in democratic societies, and “Vita Activa” includes some especially chilling implications for the current state of American politics. Totalitarianism rested, in Arendt’s view, above all on the systematic refusal to engage reality, on the substitution of ideological fantasy and outright fiction for reason and empiricism. To risk understatement, those tendencies have hardly disappeared from modern society, and may even be stronger than they were at the end of Arendt’s life.

“Vita Activa: The Spirit of Hannah Arendt” is not rated. It in English, Hebrew, German and French, with English subtitles. Running time: runs 2 hours 5 minutes.