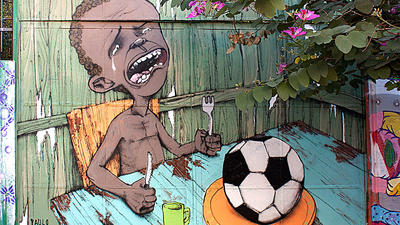 Paulo Ito’s artwork in São Paulo has been shared thousands of times online.

A work of graffiti here has become an overnight global symbol, subverting official representations of Brazil and placing street artist Paulo Ito unexpectedly in the middle of the battle to define the country’s image during next month’s World Cup.

In the untitled work on the fence of a local elementary school, a black child sits down to eat, only to be presented with a soccer ball on a plate. It went around the world quickly, Ito thinks, because it “brought together what a lot of people are thinking.”

From just two Facebook posts, the spray paint and latex image was shared more than 96,000 times, even before being subsequently reported on in numerous countries.

The simple message was obvious, even if it is metaphorical. Brazil’s poorest already receive monthly stipends for basic goods, and few of the thousands of World Cup protesters who have been on the streets ever mention food, instead focusing on cost overruns at stadiums and a shortage of quality education, healthcare and housing.

But like much else during the turbulent time before the games start, Ito’s image has taken on a different scale abroad than it has at home. Here it has even been used by those whose politics Ito considers unscrupulous, underlining the difficulty of nailing down a clear aesthetic message for the world’s cameras, which will arrive all too soon.

“Everything tends to be taken as from one side or the other, which doesn’t make sense. Right now, even the protesters don’t know what their actions will lead to, since the situation is so complex,” says Ito, 36, who’s been active in the street art scene here for 14 years. “I want the World Cup to be a failure for FIFA but a victory for the Brazilian people.”

The clash of ideas and representation over the World Cup is complex as about half the country currently thinks it will be bad overall for Brazil. At the moment, some insist that “there will be no World Cup,” saying a corrupted event should be disrupted in the name of other progressive social causes. Others have extensive complaints but are worried about linking them to the World Cup and how Brazil could look if things go the wrong way.

Still others, those in the right-leaning political opposition, may generally want to present a strong Brazil to the world but know that a poorly executed competition boosts their electoral chances in October. In the protest movement, literal fights have broken out over flags and images raised in the streets.

Then there is FIFA, soccer’s governing body, which last week presented the official World Cup video, featuring Pitbull and Jennifer Lopez and shot in Miami, alongside a gaggle of old-school Brazil Carnaval stereotypes that were widely condemned here.

Artistically, Ito’s work is firmly grounded in the tradition of São Paulo street art, which is as well-known here as it is underappreciated abroad. Its colors and fine features remind the viewer of Os Gemeos, a São Paulo graffiti duo who have garnered some international success and have worked with Ito.

But Ito says his main inspiration is pixação, the black latex paint spelling out tag names aggressively and illegally across the city in an extraterrestrial-meets-Druidic-runes script.

“People think they are representing Brazil because they do something very tropical, with some Indians. … but that’s not what we are,” says Ito. In fact, São Paulo, South America’s largest city and host of the opening match on June 12, “is chaos in concrete.”

But the viral image may already be more famous abroad than it is here. It took on a life of its own largely because a right-wing Brazilian Facebook page called TV Revolta used it to highlight its message.

“They think that everything that happens in the country is the fault of [Worker’s Party President] Dilma Rousseff. I find that type of thinking stupid,” says Ito, who says it’s important to praise the real advances made in the country while also pointing out misplaced priorities. “But we’re still very far from perfection … let’s show the world what we are, and not what some want to show or what others wish we looked like.”