Scientists studying the Amazon rain forest are tangled in a debate of nature versus nurture.

Many ecologists tend to think that before Europeans arrived in the Americas, the vast wilderness was pristine and untouched by humans. But several archaeologists argue that ancient civilizations once thrived in its thickets and played a role in its development.

Now, researchers have found evidence that indigenous people may have domesticated and cultivated Amazonian plants and trees thousands of years ago, further supporting the idea that ancient humans helped shape the forest.

“Large areas of the Amazon are less pristine than we may think,” said Hans ter Steege, a tropical ecologist at the Naturalis Biodiversity Center in the Netherlands, and an author of a paper published in Science on Thursday. “The people who lived there before Columbus left serious footprints that still persist in the composition as we see today.”

He was one of more than a hundred researchers who found that domesticated tree and palm species — like cacao, cashews, the açaí palm, the Brazil nut and rubber — were five times more likely to dominate the modern Amazonian forest than nondomesticated plants.

Carolina Levis, a doctoral student at the National Institute for Amazonian Research in Brazil and Wageningen University and Research Center in the Netherlands, was the lead author on the study. She and her team looked at a database from the Amazon Tree Diversity Network containing 1,170 plots of forest. Most plots measured approximately 2.5 acres each and had previously been investigated on foot by ecologists who counted and identified the plant species in the plots. Ms. Levis then identified 85 domestic plants to analyze.

One way the team determined that a plant had been domesticated was a look at its fruit. They found, for example, some peach palms that bore fruit weighing 200 grams, or 0.44 pounds, when the fruit grown in the wild matured to about one gram. Several of the domesticated plants they identified are still grown by South Americans. 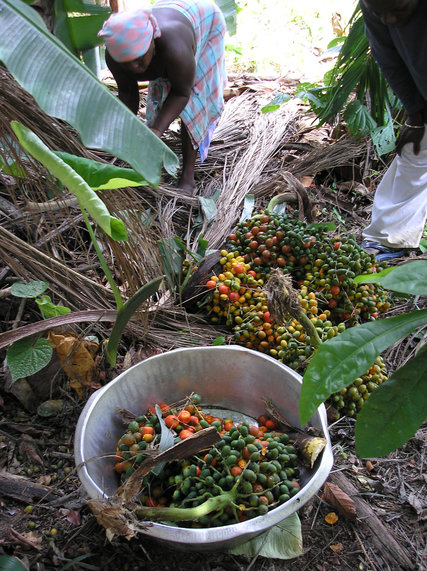 The harvesting of peach palm in the Amazon. Credit: Tinde van Andel

“It’s the first time that we show these correlations between plant species in the forest today and archaeological finds,” she said.

The findings suggest that either the ancient civilizations grew and cultivated the plants, or that they purposely settled in areas that had plants they could eat and use. Ms. Levis said she suspected that people were domesticating the plants, although the study did not definitively pinpoint how settlements were chosen. In some plots, more than half of the plant life consisted of domesticated trees and palms.

Jennifer Watling, an archaeologist at the University of São Paulo, Brazil, who was not involved with the study, said in an email that “the large number of data points sampled by these authors gives good reason to believe that the distribution of domesticated species in many areas of Amazonia is strongly linked to the actions of pre-Columbian societies.”

But Crystal McMichael, a paleoecologist from the University of Amsterdam, said the database comparisons were not convincing. New direct evidence, like fossils of domesticated plants at the archaeological sites, would help advance such theories, she said. While the study shows a potential association between ancient people and modern forest composition, it does not preclude the possibility that the domesticated plant patterns occurred with more modern settlements, she said in an email.

Dr. ter Steege disagreed. The study “changed my view of the forest,” he said. “It’s not only the ecology or the environment that created this forest, but also the people who lived there before.”