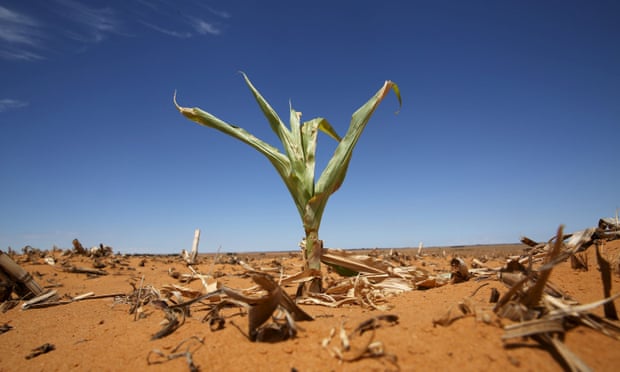 A maize plant among other dried maize in a field in Hoopstad in the Free State province, South Africa. The country suffered its driest year on record in 2015. Photograph: Siphiwe Sibeko/Reuters

More than 36 million people face hunger across southern and eastern Africa, the United Nations has warned, as swaths of the continent grapple with the worst drought in decades at a time of record high temperatures.

The immediate cause of the drought which has crippled countries from Ethiopia to Zimbabwe is one of the strongest El Niño events ever recorded. It has turned normal weather patterns upside down around the globe, climate scientists say.

But with the world still reeling from record-high temperatures in February, there are fears that the long-term impacts of climate change are also undermining the region’s ability to endure extremes in weather, leaving huge numbers of people vulnerable to hunger and disease.

The worst hit country in the current crisis is Ethiopia, where rains vital to four-fifths of the country’s crops have failed. Unicef has said it is making plans to treat more than 2 million children for malnutrition, and says more than 10 million people will need food aid.

“Ethiopia has been hit by a double blow, both from a change to the rainy seasons that have been linked to long-term climate change and now from El Niño, which has potentially led the country to one of the worst droughts in decades,” said Gillian Mellsop, Unicef representative to Ethiopia.

The crisis has been damaging even to Ethiopians not at immediate risk of going hungry. It has truncated the education of 3.9 million children and teenagers, who “are unable to access quality education opportunities because of the drought”, she said. 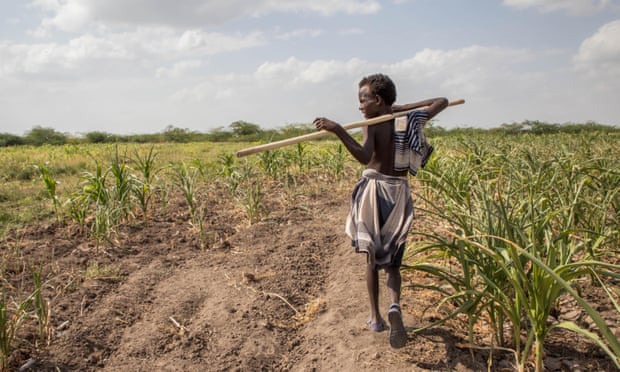 An boy walks through failed crops and farmland in Afar, Ethiopia. Four-fifths of crops in the country have failed. Photograph: Mulugeta Ayene/AP

Neighbouring countries grappling with hunger after crops failed include Somalia, Sudan and Kenya, and altogether the failed rains have left more than 20 million people “food insecure” in the region.

The drought caught many officials by surprise, because although El Niño was forecast, the weather event normally brings more rain to the region, not less.

“The typical pattern that you would expect with El Niño is very dry weather in southern Africa, but slightly wetter than normal in eastern Africa,” said Dr Linda Hirons, a research scientist at the National Centre for Atmospheric Science.

“So the fact that we have had parts of eastern Africa experiencing drought is unusual … but every single El Niño event manifests itself differently.”

In southern Africa, the drought caused by El Niño was expected, but it has been even more severe than feared, with rains failing two years in a row.

Overall nearly 16 million people in southern Africa are already going hungry, and that number could rise fast. “More than 40 million rural and 9 million poor urban people are at risk due to the impacts of El Niño’s related drought and erratic rainfall,” the World Food Programme has warned.

Zimbabwe, once the region’s bread basket, is one of the worst hit countries. In February, the country’s president Robert Mugabe declared a state of disaster due to the drought, and in less than a month official estimates of people needing food aid has risen from 3 million to 4 million.

Neighbouring countries are also scrambling to find food aid, including South Africa, whose ports are the main entry point for relief across the region.

“We are seeing this as a regional crisis, a cross-country humanitarian crisis,” said Victor Chinyama. “In each country maybe the numbers [of hungry people] are nowhere near as much as Ethiopia, but if you put these numbers together as a whole region, you get a sense of how large a crisis this is.”

More than a third of households are now going hungry, he said. Families that used to eat two meals a day are cutting back to one, and those who could once provide a single meal for their dependents are now entirely reliant on food aid, he said.

Beyond the immediate scramble to get food to those who need it, aid workers in the region say the drought has served as reminder that communities vulnerable to changing weather patterns need longer-term help adapting.

“In the past it was one big drought every 10 years, then it came to one drought every five years, and now the trends are showing that it will be one every three to five years. So we are in a crisis alright, that is true.

“But it’s going to be the new norm. So our responses need to appreciate that … there is climate change, and it’s going to affect the people that we work with, the communities we serve.”

This article was amended on 17 March 2016 to remove a picture because it was an inaccurate illustration of the theme of the article and contained ambiguities in the caption. 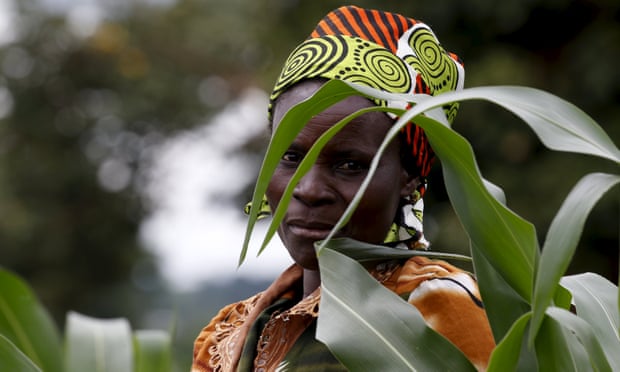 A farmer surveys her maize fields in Dowa, near the Malawi capital of Lilongwe, earlier this month. The country is experiencing its first maize shortage in a decade, causing prices to soar. Photograph: Mike Hutchings/Reuters

Severe droughts and floods triggered by one of the strongest El Niño weather events ever recorded have left nearly 100 million people in southern Africa, Asia and Latin America facing food and water shortages and vulnerable to diseases including Zika, UN bodies, international aid agencies and governments have said.

New figures from the UN’s World Food Programme say 40 million people in rural areas and 9 million in urban centres who live in the drought-affected parts of Zimbabwe, Mozambique, South Africa, Zambia, Malawi and Swaziland will need food assistance in the next year.

In addition, 10 million people are said by the UN’s Office for the Coordination of Humanitarian Affairs (Ocha) to need food in Ethiopia (pdf), and 2.8 million need assistance in Guatemala and Honduras.

Millions more people in Asia and the Pacific regions have already been affected by heatwaves, water shortages and forest fires since El Niño conditions started in mid-2015, says Ocha in a new briefing paper, which forecasts that harvests will continue to be affected worldwide throughout 2016.

“Almost 1 million children are in need of treatment for severe acute malnutrition in eastern and southern Africa. Two years of erratic rain and drought have combined with one of the most powerful El Niño events in 50 years to wreak havoc on the lives of the most vulnerable children,” said Leila Gharagozloo-Pakkala, southern Africa regional director of the UN children’s agency, Unicef.

“Governments are responding with available resources, but this is an unprecedented situation. The situation is aggravated by rising food prices, forcing families to implement drastic coping mechanisms such as skipping meals and selling off assets.”

In a joint statement, the UN’s Food and Agriculture Organisation (FAO) and the Famine Early Warning Systems Network said: “El Niño will have a devastating effect on southern Africa’s harvests and food security in 2016. The current rainfall season has so far been the driest in the last 35 years.”

Britain’s Department for International Development (DfID) said in a briefing paper: “Even if it were to start raining today, the planting window for cereals has already closed in the southern part of the region [Africa] and is fast closing elsewhere. There has been a steep rise in market prices of imported staple goods. This is restricting access to food for the most vulnerable.”

According to the World Health Organisation, the heavy rains expected from El Niño in Peru, Ecuador, Paraguay and southern Brazil could increase the spread of the Zika virus. “The Aedes aegypti mosquito breeds in standing water. We could expect more mosquito vectors which can spread Zika virus because of expanding and favourable breeding sites [in El Niño-affected countries],” the organisation said.

El Niño conditions, which stem from a natural warming of Pacific Ocean waters, lead to droughts, floods and more frequent cyclones across the world every few years. This year’s event is said by meteorologists to be the worst in 35 years and is now peaking. Although it is expected to decline in strength over the next six months, its effects on farming, health and livelihoods in developing countries could last two years or more because of failed harvests and prolonged flooding.

“Insufficient rains since March 2015 have resulted in drought conditions. In Central America, El Niño conditions have led to a second consecutive year of drought – one of the region’s most severe in history,” said an Ocha spokesman.

“Mozambique and southern African countries face a disaster if the rains do not come within a few weeks,” said Abdoulaye Balde, WFP country director in Maputo. “South Africa is 6m tonnes short of food this year. But it is the usual provider of food reserves in the region. If they have to import 6m tonnes for themselves, there will be little left for other countries. The price of food will rise dramatically.”

Zimbabwe, which declared a national emergency this month, has seen harvests devastated and food prices soar, according to the WFP in Harare. It reports that food production has halved compared to last year and maize is 53% more expensive. It expects to need nearly $1.6bn in aid to help pay for grain and other food after the drought.

Malawi is experiencing its first maize deficit in a decade, pushing the price 73% higher than the December 2015 average. In Mozambique, prices were 50% higher than last year. The country depends on food imports from South Africa and Zimbabwe, and faces a disaster if rains do not arrive in the next few weeks, said Balde.

Fears are also growing that international donors have been preoccupied by Syriaand the Ebola crisis, and have not responded to food aid requests from affected countries.

“El Niño began wreaking havoc last year. The government has done its best to tackle the resultant drought on its own, by tapping into the national food reserves and allocating more than $300m [£210m] to buy wheat in the international market,” said Ethiopian foreign minister Tedros Ghebreyesus.

“But the number of people in need of food assistance has risen very quickly, making it difficult for Ethiopia to cope alone. For the 10.2 million people in need of aid, requirements stood at $1.4bn. The Ethiopian government has so far spent $300m and a similar sum has been pledged by donors. The gap is about $800m,” he said.

According to the Famine Early Warning Systems Network, set up by the US international development agency, USAID, in 1985, continued below-average rainfall and high temperatures are likely to persist in southern African well into 2016, with the food crisis lasting into 2017.