SÃO PAULO, Brazil — Biennial art exhibitions were founded in the 1890s at almost the same time as the Olympics, and they serve a similar purpose: to bring attention to the cities that host them and the nations that participate in them. But where the Olympics are still a rather contained affair, art biennials are proliferating like art fairs, becoming homogeneous and forgettable.

The 32nd São Paulo Biennial, through Dec. 11, consciously tries to buck this trend by positioning itself as locally sensitive and globally pertinent. And its timing is perfect. On the heels of the Rio Olympics and the impeachment of Brazil’s president Dilma Rousseff, the exhibition embraces, rather than denies, the problems of the region.

This is particularly true on the first floor of the pavilion built by Oscar Niemeyer, which showcases Brazilian art with an international context: The artist Bené Fonteles has erected a “terreiro,” or ceremonial structure made of clay with a thatched roof, in an attempt to connect traditional Brazilian practices with contemporary art ones.

Objects used by an indigenous shaman sit alongside photos of Marcel Duchamp and John Lennon and Yoko Ono and a copy of João Guimarães-Rosa’s novel “Grande Sertão: Veredas” (1956) — in English, it was “The Devil to Pay in the Backlands”— a masterpiece of modern Brazilian literature. (Incorporating archaic dialects, it has been compared to Joyce’s “Finnegans Wake.”)

One of the most beautiful works in the Biennial is Jonathas de Andrade’s “The Fish” (2016), in which he filmed fishermen in the mangroves of northeast Brazil who still use traditional methods like nets and harpoons. For the video, Mr. de Andrade had the fishermen hold a caught fish to their chests, as if cradling a baby, until it takes its last breath. 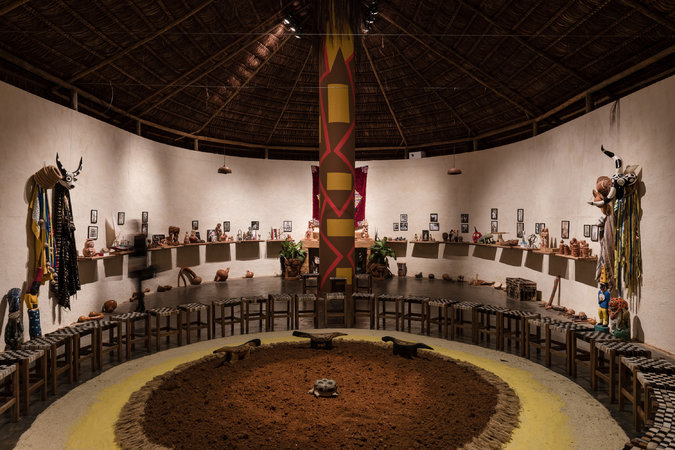 At the São Paulo Biennial, the artist Bené Fonteles has erected a “terreiro,” or ceremonial structure made of clay with a thatched roof, in an attempt to connect traditional Brazilian practices with contemporary art ones.Credit Leo Eloy/Estúdio Garagem/Fundação Bienal de São Paulo.

The video is a shockingly intimate depiction of life, death and the relationship of predator and prey — but also a reminder of our connection with other species — a fact that gets lost in the hyper-industrialized world.

The Brazilian director Leon Hirszman’s films from the 1970s documenting rural laborers singing as they work expand upon this idea. Mr. Hirszman describes the songs, which relieved boredom and shaped the rhythm and movements of the work, as “endangered” cultural products. You can’t sing, after all, over the sounds of industrial machines — or in your corporate cubicle.

Folk art and craft-based practices, often seen as an antidote to digital culture and social media, have been very popular on the biennial circuit in recent years. Folk-inspired art here includes Gilvan Samico’s prints influenced by mythology and carving in northeastern Brazil, and the visionary 1950s and ’60s work by Oyvind Fahlstrom, a Swedish multimedia artist who championed concrete poetry — a visual way of finding liberation through patterns of words and typography. The neo-hippie installation by Wlademir Dias-Pino, “Brazilian Visual Encyclopedia” (1970-2016), is a wild compendium of collages made with found materials.

The Biennial organizers stress that “Live Uncertainty” was intended to interact with the surrounding Ibirapuera Park, a habitat for indigenous tribes before the Europeans arrived. But even nature is a contested term these days, especially in Brazil, where the rain forest and grasslands were seen as obstacles to be conquered. Even Niemeyer, the architect whose futuristic buildings are scattered throughout the park, originally planned to pave over the area in an attempt to tame (if symbolically) Brazil’s unruly wilderness.

The exhibition includes installations by Pia Lindman and Ruth Ewan, which incorporate live plants, and Eduardo Navarro’s sculptural megaphone, which twists out the window to let visitors talk to a palm tree. Brazilian wood — often seen as “exotic” and hence harvested to the brink of extinction — earns a category of the Biennial unto itself.

Carolina Caycedo’s excellent video looks at how river development has affected communities in Brazil’s interior. In Rachel Rose’s video, an astronaut, David Wolf, describes how it’s harder to acclimate to Earth, with its overwhelming smells of grass and air, and gravity, than to outer space. 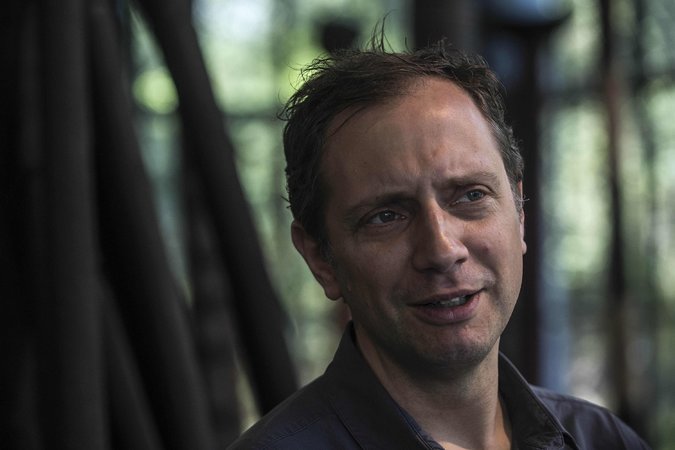 What started in the ’90s as “identity art,” the idea that an individual’s identity consists of multiple factors, including gender, race, ethnicity, class and sexuality, has now blossomed into investigations of “the post-human,” which could mean a robot or an extraterrestrial.

Lyle Ashton Harris provides some grounding of these cultural shifts in his beautiful assemblage of photographs from this American artist’s journals intertwined with video. Much of his archive is from the late ’80s and ’90s, coinciding with landmark events such as the Black Popular Culture Conference in 1991, the truce between the Crips and the Bloods in 1992 and the Black Nations/Queer Nations conference in 1995.

Cecilia Bengolea and Jeremy Deller’s video highlights a competitive dancer in Jamaican dancehall music culture, echoing the importance of popular music and identity that reverberates throughout the show.

Another tic of biennials is their expansionist tendency: Tired of the white cube, artists and curators would rather inhabit shops, hospitals, schools. This seems like a democratic move, but it often functions in just the opposite way, expending a huge amount of viewers’ time and energy.

“Live Uncertainty” remains mostly — thankfully — in the pavilion. One outside work included William Pope.L’s roving performance with a small contingent of local dancers, which took place over three days. Performers moved through the city in costumes inspired by debutante festivals. They made a sharp contrast with demonstrators who were springing up, too, protesting the president’s impeachment.

Biennials are now given the impossible task of making sense not only of contemporary art but also contemporary history, politics, philosophy, economics, the environment and beyond — all the while remaining sensitive to local culture and cognizant of global developments.

With this tall order, “Live Uncertainty” does an admirable balancing act, arguing for the vitality of indigenous knowledge and experience, and of wisdom drawn from the people who inhabited this hemisphere long before Europeans arrived. Given the current climate of uncertainty in Brazil, this makes more than a little good sense.