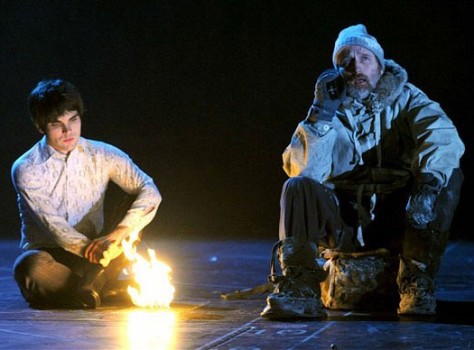 Climate science is a tricky subject for the stage, as two new plays in London make plain. Robert Butler puts his finger on the problem … 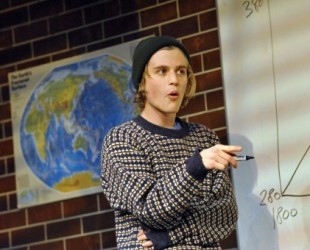 Highly divisive issues have generated some important plays: think of McCarthyism and Arthur Miller’s “The Crucible”, or AIDS and Tony Kushner’s “Angels in America”, or political correctness and David Mamet’s “Oleanna”. Yet 20 years after the first report from the Intergovernmental Panel on Climate Change, and five years after “An Inconvenient Truth”, no major playwright had written a play about the subject. Many reasons have been suggested for this. The science is complex. The links between cause and effect (on which plays depend) are hard to show. Arts organisations get sponsorship from Big Oil. And everyone has made up their mind anyway.

The National Theatre tried to get round this last point by commissioning four youngish playwrights, none of whom (as they cheerfully admitted in a pre-show discussion) had any special knowledge in this area. As the playwrights put it, they were “on a journey”. Since the National has taken active and informed steps to reduce its own carbon emissions, it sounds as if there were administrators in the building who initially knew more about climate change than the writers.

The title had to be chosen before anything was written. Many of the scenes would revolve around Copenhagen, but that name was out as the National had already staged a superb play about science called “Copenhagen”. In six months the writers industriously interviewed everyone from the British Government’s chief scientific adviser and Greenpeace activists to prominent sceptics and the chairman of Shell. They went on to develop multiple storylines to reflect this complexity. The idea—according to the play’s dramaturg Ben Power—was “to find a new way of talking about this subject”. 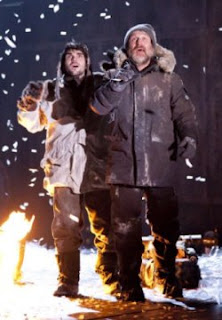 The production also comes accompanied with a series of talks (from scientists, sceptics and activists) and panel discussions. There is even something called a ‘talkaoke’, a roundtable discussion that takes place in the foyer immediately after the show, where—amazingly for theatre—people can take the microphone and criticise what they’ve just seen. What’s the result of all this careful, reasonable, fact-checked, inclusive sincerity? “Greenland” was slammed: “crushingly dull” (London Standard), “shamelessly partisan” (Daily Telegraph), “rotten theatre” (Sunday Times).

“The Heretic” took another route. The playwright, Richard Bean, a former stand-up comic, has a sharp eye for modern pieties. His recent play “England People Very Nice” tackled the subject of immigration. Bean particularly admires Joe Orton, a playwright from the 1960s, as someone who would “go around, find the open wound and pour salt in it.” In ‘The Heretic’, he delivers a comedy that fictionalises (and skews) many of the current controversies and “-gates” with plenty of verve and attack.

Bean’s play takes an Earth Scientist at York University (played with crisp disdain by Juliet Stevenson) whose research into sea-level rises isn’t going to help her faculty’s chances of getting a major grant. Her appearance on the BBC’s “Newsnight” leads to her sacking, and she ends up having a regular column in the Daily Telegraph. (This time round the Telegraph’s theatre critic could see nothing “shamelessly partisan” about the play, and said it was “an absolute corker”.)

It’s probably a mistake to worry about the ways in which the science is misrepresented when the rest of the plot is not very plausible either. For the first-night audience, neither failing seemed to matter because “The Heretic” has two much more important things going for it: likeable characters and very funny jokes. It even has a happy ending. The Royal Court, hotbed of radical left-wing plays for so many decades, has produced the most right-wing play in London. It’d be interesting to know how much this cheers its staff. 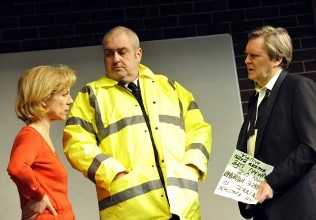 Jim Thompson, author of “The Grifters”, once wrote there are 32 ways to write a story (and he had used every one of them), but there is only one plot: “Things are not what they seem.” The problem with climate change is that the scientific consensus is a bit of a bore. It just doesn’t catch our imagination. As an audience, we are naturally drawn to deception and mystery, the half-hidden and the shadows. The theatre may be the one place where we hope our trust in authority figures will prove to be misplaced.

The authors of “Greenland” might have had more fun if they had concentrated on the smooth and powerful authority figures who deny the science, rather than the earnest folks who fret over it. That’s where the action is. As David Mamet told an interviewer, “Drama is basically about lies, somebody lying to somebody.” It’s the impulse audiences had in Ancient Greece, when characters were portrayed with masks. Whichever way you tell the story, we want to see the mask slip.

Robert Butler, a former theatre critic, blogs on the arts and the environment at the Ashden Directory, which he edits. His last article was about the lasting power of “Heart of Darkness”