As California is finding out, drought can make people — and their governments — do things that might otherwise be unthinkable.

With their small city beset by drought, civic leaders hired “moisture accelerator” Charles Hatfield, who claimed to have a secret formula of chemicals to produce rain.

“It was a disaster,” said Rick Crawford, supervisor of special collections at San Diego’s central library. 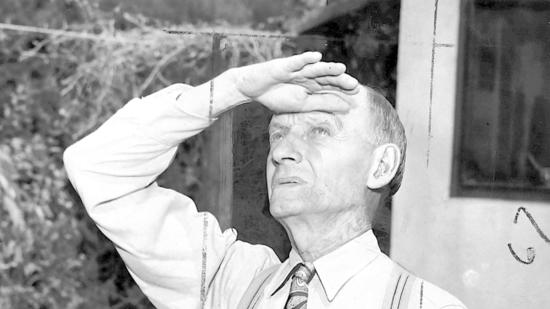 Charles Hatfield scans the skies for signs of rain. The debate continues over whether he was a fraud or a man who had discovered an early forerunner to modern cloud-seeding. (Gordon Wallace / Los Angeles Times)

————
FOR THE RECORD:
San Diego “rainmaker” case: An article in the June 1 California section about San Diego’s hiring in 1915 of “rainmaker” Charles Hatfield was accompanied by a historic photo of Hatfield on the ladder of a 20-foot tower, which was identified as one he had built east of San Diego. He did build such a tower for San Diego, aimed at “wringing moisture from the air”; however, the photo was of another tower, in Coalinga, Calif., in 1924.
————

Hatfield and his younger brother built a 20-foot tower in the deep woods east of the city and began what one city official would later call “an incantation aimed at wringing moisture from the air.” Smoke drifted skyward.

What followed in January and early February of 1916 was a downpour — 30 inches of rain by some estimates.

Mission Valley flooded. The San Diego River jumped its banks. Farms, homes, bridges and businesses were swept away. Little Landers, a farming commune, was destroyed. Two dams were damaged and a third failed. Estimates of the deaths range from a dozen to 50.

Hatfield, who had done other rainmaking chores, decided to flee.

“Fearful of being lynched by angry farmers, Hatfield ‘got out of Dodge,’ as the saying goes, leaving town during the night,” wrote Dan Walker in his “Thirst for Independence: The San Diego Water Story,” published in 2004. “He never received his $10,000.”

When the waters receded, Hatfield returned and filed a lawsuit. Litigation dragged on for years, not settled until the San Diego County Superior Court rejected it in 1938.

From the “Hatfield Flood” came a legend that has endured for decades, inspiring books, historical reviews, at least two country-western songs and, very loosely, the 1956 movie “The Rainmaker” starring Burt Lancaster and Katharine Hepburn.

The debate continues over whether Hatfield was a fraud or a man who had discovered an early forerunner to modern cloud-seeding.

With San Diego again gripped by drought, the Hatfield saga is getting renewed notice: a display curated by Crawford in the special collections section of the downtown library and a short docu-drama on the Travel Channel.

Then, as now, San Diego was deeply concerned that its meager amount of native water will not sustain its population. By the late 19th century, San Diego officials were determined to capture as much rain runoff as possible. “We were building more dams than anybody in the world,” Crawford said.

A business organization called the San Diego Wide Awake Improvement Club demanded that the City Council do more to keep San Diego from withering with thirst.

When drought left the reservoirs at a low ebb, the council was ready to take a chance, even if it meant spending lots of money. The means have changed but not the motive; as Walker’s book suggests, the quest for water “independence” never ends in San Diego.

Modern-day officials have bet on an expensive deal for water from the Imperial Valley and a $1-billion desalination plant being built in Carlsbad.

In 1915, officials were taken with an impeccably dressed, politely earnest transplant from Kansas, the son of a devout Quaker family.

Charles Hatfield spoke in scientific terms and promised to work for free unless he could fill the Morena reservoir. He talked of having successfully using his rainmaking technique in Alaska, Los Angeles County, the San Joaquin Valley, Texas and Hemet. He had studied the works of other rainmakers, including the so-called Australian Wizard, and was familiar with the popular book “Elementary Meteorology.”

Then concern set in, followed by distress and then horror as the water roared westward, unstoppable. The San Diego River, usually a few dozen yards wide, was calculated to be a mile in width.

“It seemed the rains would never end and the damage would never stop mounting,” historian Thomas Patterson wrote in a 1970 article for the San Diego History Center. “Great trees tumbled root over branch. Sticks of lumber, railroad ties and parts of houses floated crazily.”

Just what Hatfield did at his tower near Lake Morena is unclear.

Some accounts indicate he set the chemicals on fire and let the smoke drift upward.

Shelley Higgins, who later served as a Superior Court judge, wrote in his book “The Fantastic City of San Diego” that he went by the tower and saw Hatfield “shooting bombs” into the air.

The controversy and litigation did not hurt Hatfield’s career. Offers to make rain came from farmers and others throughout the Midwest and Texas.

The library exhibit includes a letter in 1920 from a New York-based sugar company begging Hatfield to come to Cuba. In 1929 he answered a plea from officials in Honduras to produce rain to douse a forest fire.

The Depression ended Hatfield’s rainmaking career; Dust Bowl farmers could not afford his services. He went back to his original trade: selling sewing machines.

Hatfield died in 1958 at age 82 and was buried in Glendale — never having revealed his chemical formula.

June 5, 8:50 a.m.: A previous version of the photo caption misidentified the tower built by Charles Hatfield as being the one east of San Diego. The photo is of a similar tower in Coalinga, Calif., in 1924.