Stephen Harper is stepping up his attack on rival Justin Trudeau’s musings about the “root causes” behind the Boston bombings, saying the only appropriate reaction to such attacks is to condemn the actions and direct government efforts to fighting them.

“This is not a time to commit sociology, if I can use an expression,” [emphasis added] Mr. Harper told a news conference in Ottawa, a phrase he later repeated in French for the benefit of French-language media outlets.

Mr. Harper had been asked by a journalist Thursday to say at what point he considered it acceptable to start talking about the “root causes” that might lead someone to plot an attack on North American soil, such as the Canadian residents arrested this week and accused of scheming to derail a Via train.

The Prime Minister made the remark on the same day a fierce debate erupted over news that Tory MPs are being urged to blanket their ridings with flyers bashing Mr. Trudeau as an inexperienced lightweight.

“Root causes” is the phrase Mr. Trudeau used last week when he said it was essential to look at the motivating factors behind the Boston Marathon bombings. Mr. Harper wasted little time in ridiculing his Liberal opponent for what he considered a weak response to terrorism.

On Thursday, the Prime Minister elaborated on his assertion that now is no time for academic pondering, saying that those who would seek to hurt Canada are starkly opposed to Western values.

“These things are serious threats – global terrorist attacks, people who have agendas of violence that are deep and abiding threats to all the values that our society stands for,” the Prime Minister said.

To devote this much time to the leader of the third-biggest party in the Commons suggests Mr. Harper is stooping to conquer – but Conservatives say privately they believe the opportunity to brand Mr. Trudeau as inexperienced is too good to pass up.

The Tories have recently begun running attack ads that brand the Liberal Leader as inexperienced or “in over his head” and the Conservatives feel Mr. Trudeau has confirmed this criticism.

Mr. Harper defended the use of taxpayers’ dollars to finance a bulk-mail campaign – known as 10-per-centers – against Mr. Trudeau at a news conference on Thursday. He said the campaign is well within the rules of the House of Commons, and MPs from all parties send partisan missives.

But the newly minted Liberal Leader is hitting back, accusing the Tories of using the public purse to spread distortions and lies.

“Instead of defending an increasingly indefensible, mediocre record on the economy and on various decisions, they attack and they use whatever public resources they can to turn people away from politics and to foster cynicism,” Mr. Trudeau said in Happy Valley-Goose Bay.

Separately, Thursday, the Combatting Terrorism Act, a bill that would give additional police powers at the cost of civil liberties, received Royal Assent. The Harper government, which sponsored the legislation, did not say how soon S-7 comes into force.

With a report from The Canadian Press

When asked about the RCMP arrests made in an alleged terrorist plot, Prime Minister Stephen Harper had a warning for Canadians who would “commit sociology.”*

The RCMP has confirmed that it is aware of several sociologist networks operating in a number of Canadian universities. Sources say arrests are imminent.

While most sociologists currently operating in Canada are thought to be of the home-grown variety, there appears to be a great deal of international coordination through various websites, social media and academic journals.

Public Safety Minister Vic Toews is expected to introduce emergency minimum sentences legislation for anyone who commits sociology or provides material support to a known sociologist network. The legislation could be introduced as early as tomorrow.

Sources say the RCMP will likely make arrests of known sociologists in the coming hours. More details will be provided as the story develops.

David Bernans is a Québec-based writer and translator. He is the author of Collateral Murder. Follow him on twitter @dbernans.

* An actual quote! This is a satirical article, but, believe it or not our Prime Ministeractually said this. It has to do with the Harper government’s insistence that ignorance is the best policy when it comes to the root causes of evil.

4:30 pm UPDATE: This reporter was interviewing security expert Guy Lapoint on the extent of sociology in Canada when he was taken away for questioning by the RCMP. Just before the RCMP barged into Lapoint’s office he was saying, “If only we had some way to find out what makes people commit sociology, some sort of macro-view of the whole society that could explain this phenomenon, we could…”

As two men were arrested this week for allegedly conspiring to carry out a terrorist attack, the Canadian Prime Minister Stephen Harper was not interested in talking about the causes of terrorism. He said: “I think, though, this is not a time to commit sociology, if I can use an expression… The root causes of terrorism is terrorists.”

He inspired me to make this for Sociology at Work. Go forth and commit sociology, friends! 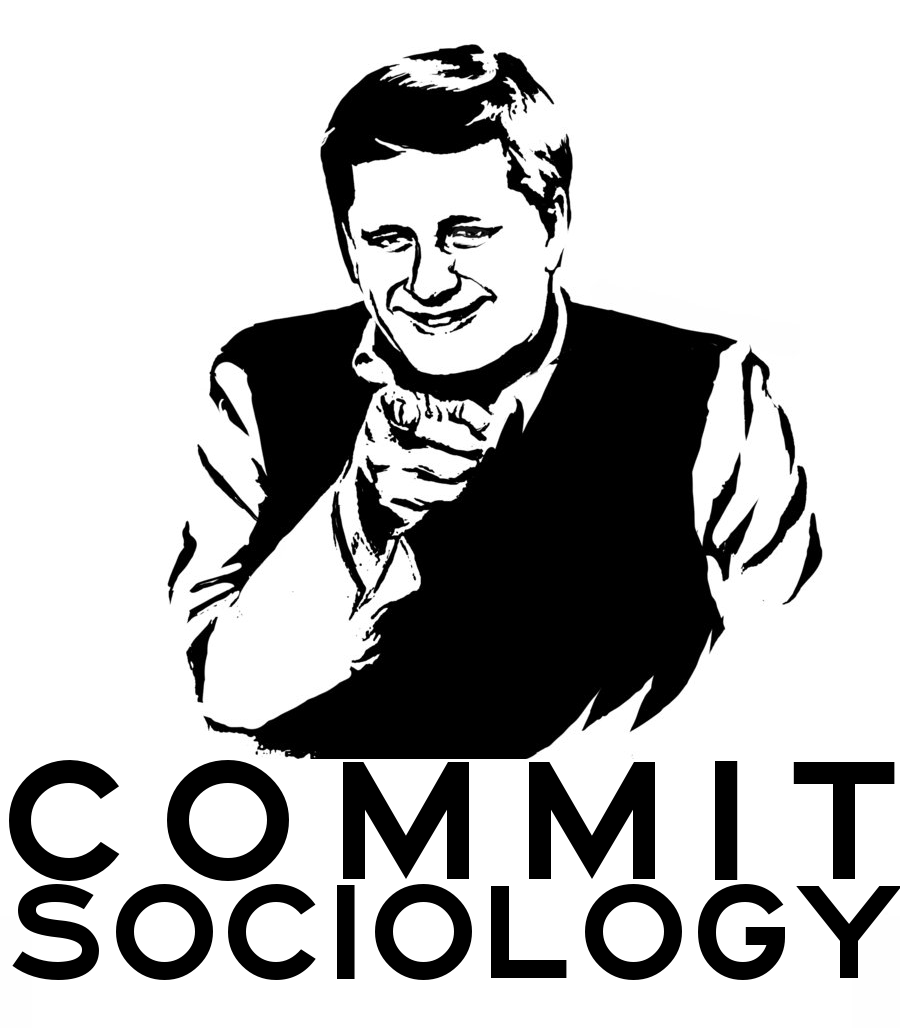