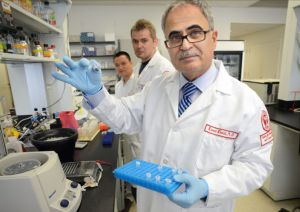 NEW YORK (The Borowitz Report)—There is a deep-seated fear among some Americans that an Ebola outbreak could make the country turn to science.

In interviews conducted across the nation, leading anti-science activists expressed their concern that the American people, wracked with anxiety over the possible spread of the virus, might desperately look to science to save the day.

“It’s a very human reaction,” said Harland Dorrinson, a prominent anti-science activist from Springfield, Missouri. “If you put them under enough stress, perfectly rational people will panic and start believing in science.”

Additionally, he worries about a “slippery slope” situation, “in which a belief in science leads to a belief in math, which in turn fosters a dangerous dependence on facts.”

At the end of the day, though, Dorrinson hopes that such a doomsday scenario will not come to pass. “Time and time again through history, Americans have been exposed to science and refused to accept it,” he said. “I pray that this time will be no different.”