It is one of the most important developments in human history, affecting everything from engineering to international trade to political systems.

On the facade of the Ministry of Justice in Paris, just below a ground-floor window, is a marble shelf engraved with a horizontal line and the word ‘MÈTRE’. It is hardly noticeable in the grand Place Vendôme: in fact, out of all the tourists in the square, I was the only person to stop and consider it. But this shelf is one of the last remaining ‘mètre étalons’ (standard metre bars) that were placed all over the city more than 200 years ago in an attempt to introduce a new, universal system of measurement. And it is just one of many sites in Paris that point to the long and fascinating history of the metric system.

“Measurement is one of the most banal and ordinary things, but it’s actually the things we take for granted that are the most interesting and have such contentious histories,” said Dr Ken Alder, history professor at Northwestern University and author of The Measure of All Things, a book about the creation of the metre. 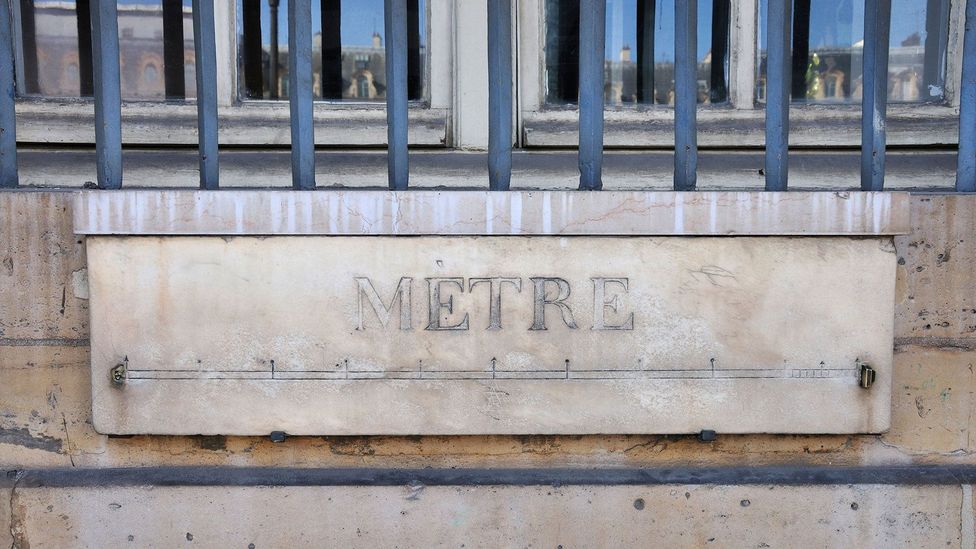 One of the last remaining ‘mètre étalons’, or standard metre bars, can be found below a ground-floor window on the Ministry of Justice in Paris (Credit: PjrTravel/Alamy)

We don’t generally notice measurement because it’s pretty much the same everywhere we go. Today, the metric system, which was created in France, is the official system of measurement for every country in the world except three: the United States, Liberia and Myanmar, also known as Burma. And even then, the metric system is still used for purposes such as global trade. But imagine a world where every time you travelled you had to use different conversions for measurements, as we do for currency. This was the case before the French Revolution in the late 18th Century, where weights and measures varied not only from nation to nation, but also within nations. In France alone, it was estimated at that time that at least 250,000 different units of weights and measures were in use during the Ancien Régime.

The French Revolution changed all that. During the volatile years between 1789 and 1799, the revolutionaries sought not only to overturn politics by taking power away from the monarchy and the church, but also to fundamentally alter society by overthrowing old traditions and habits. To this end, they introduced, among other things, the Republican Calendar in 1793, which consisted of 10-hour days, with 100 minutes per hour and 100 seconds per minute. Aside from removing religious influence from the calendar, making it difficult for Catholics to keep track of Sundays and saints’ days, this fit with the new government’s aim of introducing decimalisation to France. But while decimal time did not stick, the new decimal system of measurement, which is the basis of the metre and the kilogram, remains with us today. 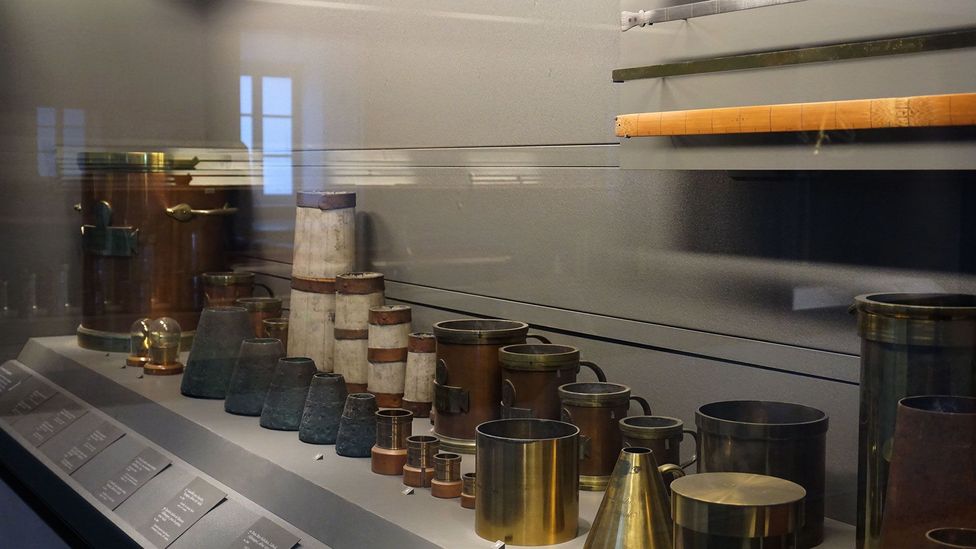 Prior to the French Revolution, at least 250,000 different units of measurement were used throughout France (Credit: Madhvi Ramani)

The task of coming up with a new system of measurement was given to the nation’s preeminent scientific thinkers of the Enlightenment. These scientists were keen to create a new, uniform set based on reason rather than local authorities and traditions. Therefore, it was determined that the metre was to be based purely on nature. It was to be one 10-millionth of the distance from the North Pole to the equator.

The line of longitude running from the pole to the equator that would be used to determine the length of the new standard was the Paris meridian. This line bisects the centre of the Paris Observatory building in the 14th arrondissement, and is marked by a brass strip laid into the white marble floor of its high-ceilinged Meridian Room, or Cassini Room.

Although the Paris Observatory is not currently open to the public, you can trace the meridian line through the city by looking out for small bronze disks on the ground with the word ARAGO on them, installed by Dutch artist Jan Dibbets in 1994 as a memorial to the French astronomer François Arago. This is the line that two astronomers set out from Paris to measure in 1792. Jean-Baptiste-Joseph Delambre travelled north to Dunkirk while Pierre Méchain travelled south to Barcelona.

Using the latest equipment and the mathematical process of triangulation to measure the meridian arc between these two sea-level locations, and then extrapolating the distance between the North Pole and the equator by extending the arc to an ellipse, the two astronomers aimed to meet back in Paris to come up with the new, universal standard of measurement within one year. It ended up taking seven. 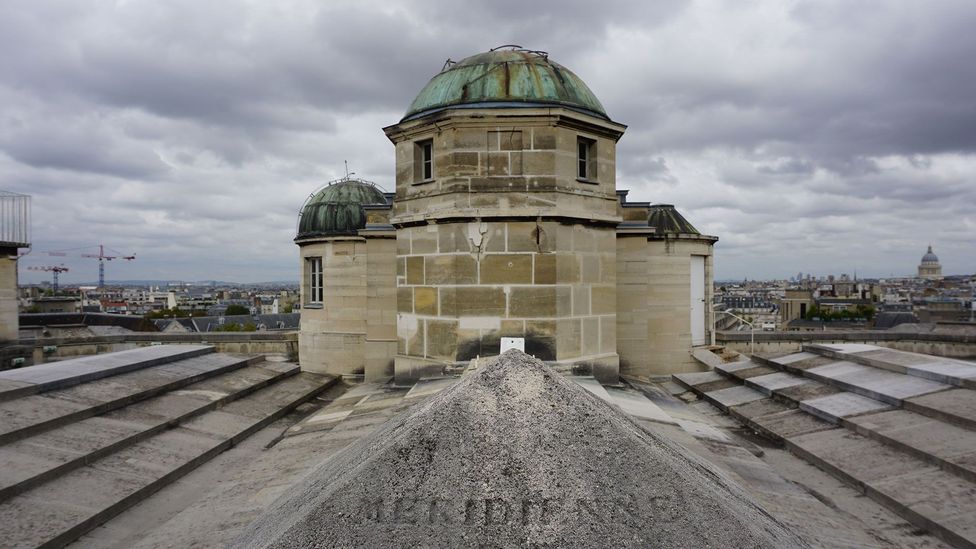 The line of longitude used to determine the length of the metre runs through the centre of the Paris Observatory (Credit: Madhvi Ramani)

As Dr Alder details in his book, measuring this meridian arc during a time of great political and social upheaval proved to be an epic undertaking. The two astronomers were frequently met with suspicion and animosity; they fell in and out of favour with the state; and were even injured on the job, which involved climbing to high points such as the tops of churches.

The Pantheon, which was originally commissioned by Louis XV to be a church, became the central geodetic station in Paris from whose dome Delambre triangulated all the points around the city. Today, it serves as a mausoleum to heroes of the Republic, such as Voltaire, René Descartes and Victor Hugo. But during Delambre’s time, it served as another kind of mausoleum – a warehouse for all the old weights and measures that had been sent in by towns from all over France in anticipation of the new system.

But despite all the technical mastery and labour that had gone into defining the new measurement, nobody wanted to use it. People were reluctant to give up the old ways of measuring since these were inextricably bound with local rituals, customs and economies. For example, an ell, a measure of cloth, generally equalled the width of local looms, while arable land was often measured in days, referencing the amount of land that a peasant could work during this time. 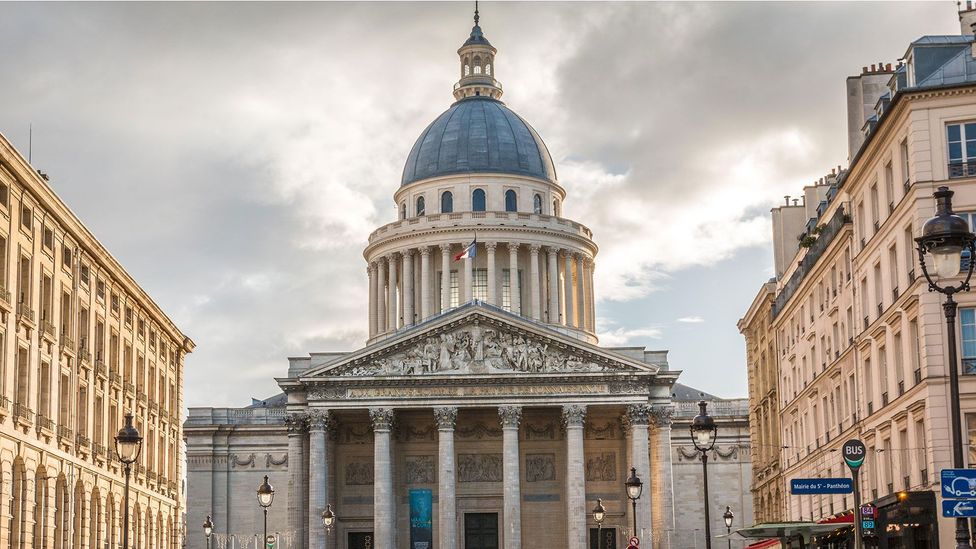 Paris’ Pantheon once stored different weights and measures sent from all across France in anticipation of the new standardised system (Credit: pocholo/Alamy)

The Paris authorities were so exasperated at the public’s refusal to give up their old measure that they even sent police inspectors to marketplaces to enforce the new system. Eventually, in 1812, Napoleon abandoned the metric system; although it was still taught in school, he largely let people use whichever measures they liked until it was reinstated in 1840. According to Dr Alder, “It took a span of roughly 100 years before almost all French people started using it.”

This was not just due to perseverance on the part of the state. France was quickly advancing into the industrial revolution; mapping required more accuracy for military purposes; and, in 1851, the first of the great World’s Fairs took place, where nations would showcase and compare industrial and scientific knowledge. Of course, it was tricky to do this unless you had clear, standard measures, such as the metre and the kilogram. For example, the Eiffel Tower was built for the 1889 World’s Fair in Paris, and at 324m, was at that time the world’s tallest man-made structure. 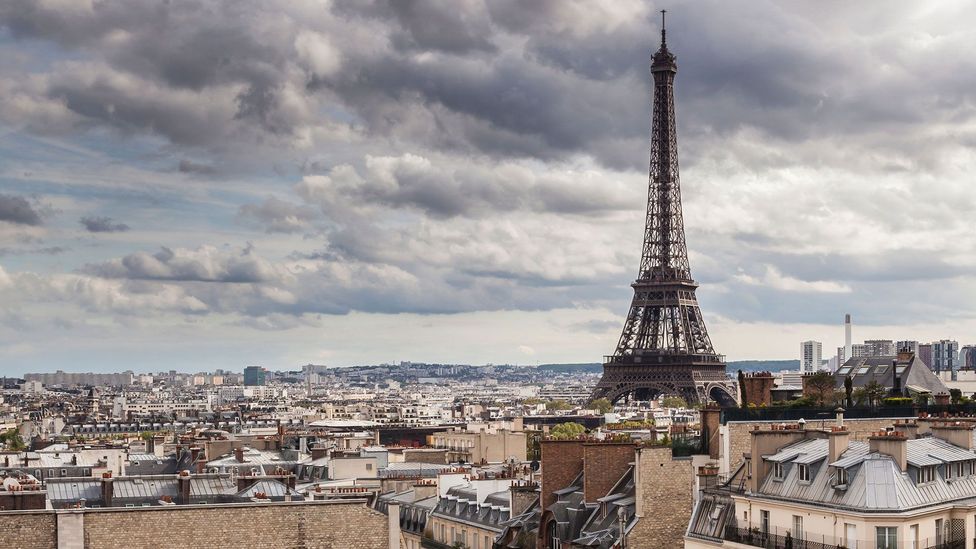 The metric system was necessary to compare industrial and scientific knowledge – such as the height of the Eiffel Tower – at the World’s Fairs (Credit: robertharding/Alamy)

All of this came together to produce one of the world’s oldest international institutions: The International Bureau of Weights and Measures (BIPM). Located in the quiet Paris suburb of Sèvres, the BIPM is surrounded by landscaped gardens and a park. Its lack of ostentatiousness reminded me again of the mètre étalon in the Place Vendôme; it might be tucked away, but it is fundamental to the world we live in today.

Originally established to preserve international standards, the BIPM promotes the uniformity of seven international units of measurement: the metre, the kilogram, the second, the ampere, the kelvin, the mole and the candela. It is the home of the master platinum standard metre bar that was used to carefully calibrate copies, which were then sent out to various other national capitals. In the 1960s, the BIPM redefined the metre in terms of light, making it more precise than ever. And now, defined by universal laws of physics, it was finally a measure truly based on nature. 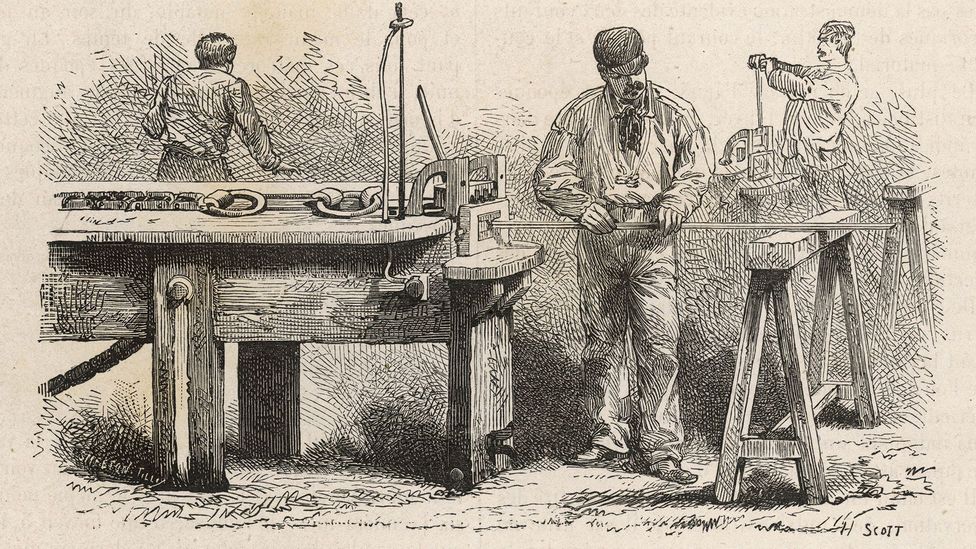 The International Bureau of Weights and Measures (BIPM) was established to promote the uniformity of international units of measurement (Credit: Chronicle/Alamy)

The building in Sèvres is also home to the original kilogram, which sits under three bell jars in an underground vault and can only be accessed using three different keys, held by three different individuals. The small, cylindrical weight cast in platinum-iridium alloy is also, like the metre, due to be redefined in terms of nature – specifically the quantum-mechanical quantity known as the Planck constant – by the BIPM this November.

“Establishing a new basis for a new definition of the kilogram is a very big technological challenge. [It] was described at one point as the second most difficult experiment in the whole world, the first being discovering the Higgs Boson,” said Dr Martin Milton, director of the BIPM, who showed me the lab where the research is being conducted.

As he explained the principle of the Kibble balance and the way in which a mass is weighed against the force of a coil in a magnetic field, I marvelled at the latest scientific engineering before me, the precision and personal effort of all the people who have been working on the kilogram project since it began in 2005 and are now very close to achieving their goal. 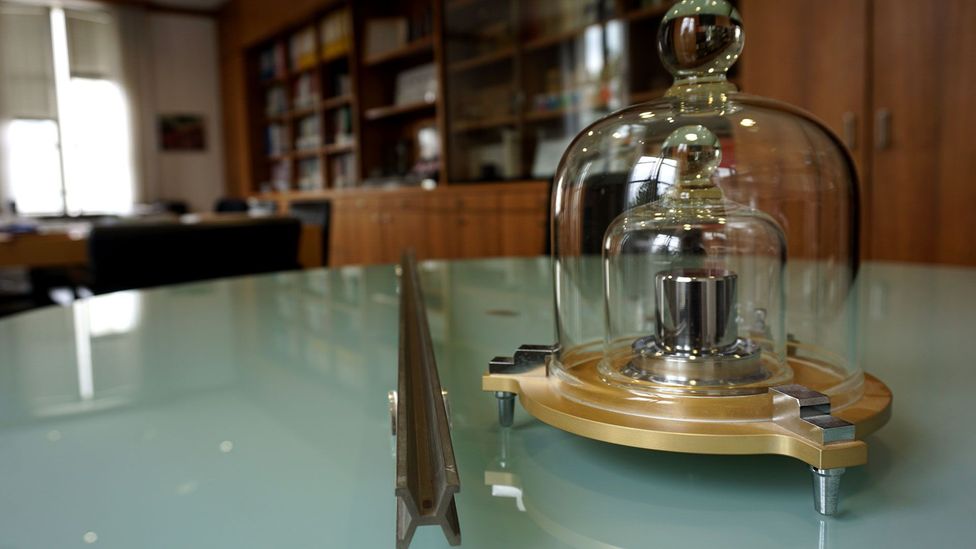 As with the 18th-Century meridian project, defining measurement continues to be one of our most important and difficult challenges. As I walked further up the hill of the public park that surrounds the BIPM and looked out at the view of Paris, I thought about the structure of measurement underlying the whole city. The machinery used for construction; the trade and commerce happening in the city; the exact quantities of drugs, or radiation for cancer therapy, being delivered in the hospitals.

What started with the metre formed the basis of our modern economy and led to globalisation. It enabled high-precision engineering and continues to be essential for science and research, progressing our understanding of the universe.

CORRECTION: A previous version of this story incorrectly described the placement of the meridian line in the Paris Observatory. We regret the error and have updated the text accordingly.

You may also be interested in:
• How India gave us the zero
• The island that forever changed science
• The clock that changed the meaning of time