Nonviolent protests are twice as likely to succeed as armed conflicts – and those engaging a threshold of 3.5% of the population have never failed to bring about change.

In 1986, millions of Filipinos took to the streets of Manila in peaceful protest and prayer in the People Power movement. The Marcos regime folded on the fourth day.

In 2003, the people of Georgia ousted Eduard Shevardnadze through the bloodless Rose Revolution, in which protestors stormed the parliament building holding the flowers in their hands.

Earlier this year, the presidents of Sudan and Algeria both announced they would step aside after decades in office, thanks to peaceful campaigns of resistance.

In each case, civil resistance by ordinary members of the public trumped the political elite to achieve radical change.

There are, of course, many ethical reasons to use nonviolent strategies. But compelling research by Erica Chenoweth, a political scientist at Harvard University, confirms that civil disobedience is not only the moral choice; it is also the most powerful way of shaping world politics – by a long way.

Looking at hundreds of campaigns over the last century, Chenoweth found that nonviolent campaigns are twice as likely to achieve their goals as violent campaigns. And although the exact dynamics will depend on many factors, she has shown it takes around 3.5% of the population actively participating in the protests to ensure serious political change.

Chenoweth’s influence can be seen in the recent Extinction Rebellion protests, whose founders say they have been directly inspired by her findings. So just how did she come to these conclusions? 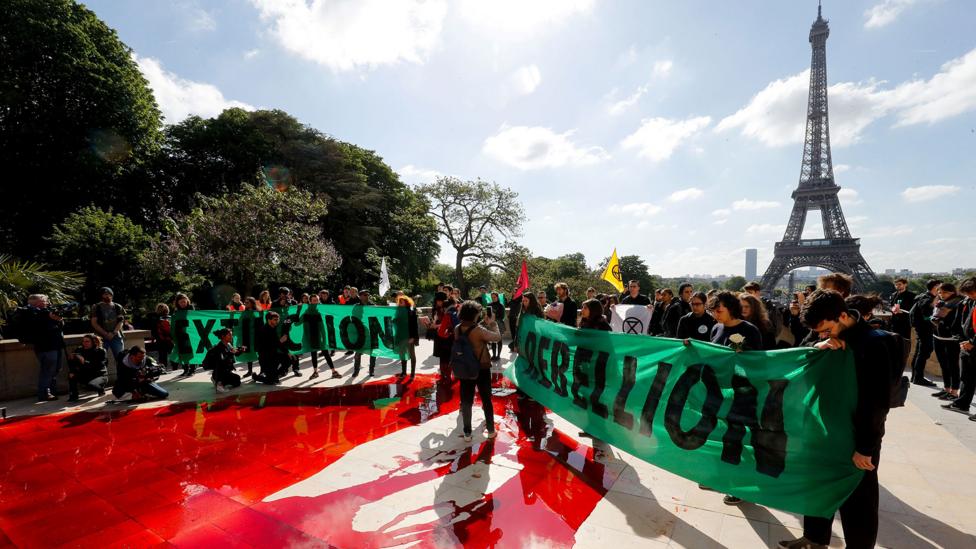 The organisers of Extinction Rebellion have stated that Chenoweth’s work inspired their campaign (Credit: Getty Images)

Needless to say, Chenoweth’s research builds on the philosophies of many influential figures throughout history. The African-American abolitionist Sojourner Truth, the suffrage campaigner Susan B Anthony, the Indian independence activist Mahatma Gandhi and the US civil rights campaigner Martin Luther King have all convincingly argued for the power of peaceful protest.

Yet Chenoweth admits that when she first began her research in the mid-2000s, she was initially rather cynical of the idea that nonviolent actions could be more powerful than armed conflict in most situations. As a PhD student at the University of Colorado, she had spent years studying the factors contributing to the rise of terrorism when she was asked to attend an academic workshop organised by the International Center of Nonviolent Conflict (ICNC), a non-profit organisation based in Washington DC. The workshop presented many compelling examples of peaceful protests bringing about lasting political change – including, for instance, the People Power protests in the Philippines.

But Chenoweth was surprised to find that no-one had comprehensively compared the success rates of nonviolent versus violent protests; perhaps the case studies were simply chosen through some kind of confirmation bias. “I was really motivated by some scepticism that nonviolent resistance could be an effective method for achieving major transformations in society,” she says

Working with Maria Stephan, a researcher at the ICNC, Chenoweth performed an extensive review of the literature on civil resistance and social movements from 1900 to 2006 – a data set then corroborated with other experts in the field. They primarily considered attempts to bring about regime change. A movement was considered a success if it fully achieved its goals both within a year of its peak engagement and as a direct result of its activities. A regime change resulting from foreign military intervention would not be considered a success, for instance. A campaign was considered violent, meanwhile, if it involved bombings, kidnappings, the destruction of infrastructure – or any other physical harm to people or property.

“We were trying to apply a pretty hard test to nonviolent resistance as a strategy,” Chenoweth says. (The criteria were so strict that India’s independence movement was not considered as evidence in favour of nonviolent protest in Chenoweth and Stephan’s analysis – since Britain’s dwindling military resources were considered to have been a deciding factor, even if the protests themselves were also a huge influence.)

By the end of this process, they had collected data from 323 violent and nonviolent campaigns. And their results – which were published in their book Why Civil Resistance Works: The Strategic Logic of Nonviolent Conflict – were striking.

Overall, nonviolent campaigns were twice as likely to succeed as violent campaigns: they led to political change 53% of the time compared to 26% for the violent protests.

This was partly the result of strength in numbers. Chenoweth argues that nonviolent campaigns are more likely to succeed because they can recruit many more participants from a much broader demographic, which can cause severe disruption that paralyses normal urban life and the functioning of society.

The People Power campaign against the Marcos regime in the Philippines, for instance, attracted two million participants at its height, while the Brazilian uprising in 1984 and 1985 attracted one million, and the Velvet Revolution in Czechoslovakia in 1989 attracted 500,000 participants. 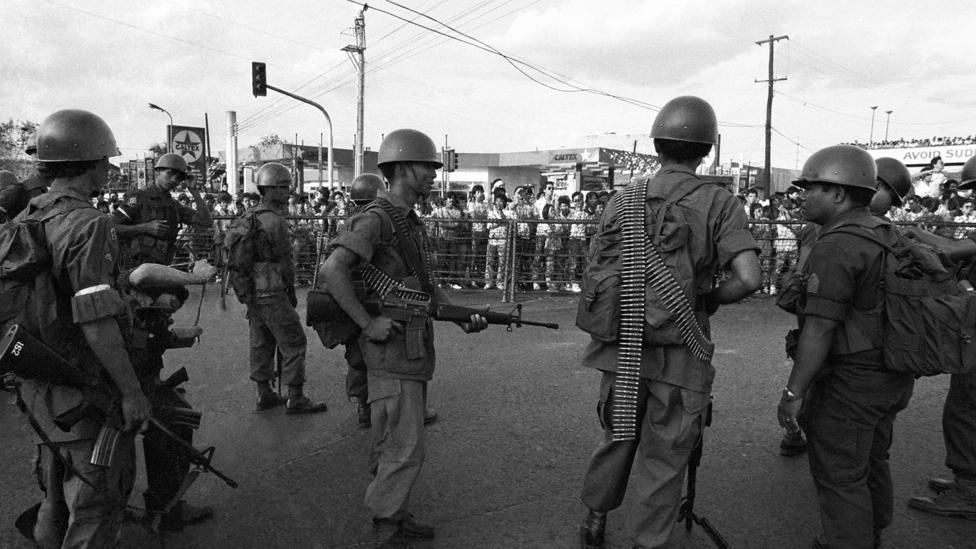 Having attracted millions of supporters, the People Power demonstrations removed the Marcos regime in the Phillipines (Credit: Getty Images)

“Numbers really matter for building power in ways that can really pose a serious challenge or threat to entrenched authorities or occupations,” Chenoweth says – and nonviolent protest seems to be the best way to get that widespread support.

Once around 3.5% of the whole population has begun to participate actively, success appears to be inevitable.

Besides the People Power movement, the Singing Revolution in Estonia and the Rose Revolution in Georgia all reached the 3.5% threshold

“There weren’t any campaigns that had failed after they had achieved 3.5% participation during a peak event,” says Chenoweth – a phenomenon she has called the “3.5% rule”. Besides the People Power movement, that included the Singing Revolution in Estonia in the late 1980s and the Rose Revolution in Georgia in the early 2003.

Chenoweth admits that she was initially surprised by her results. But she now cites many reasons that nonviolent protests can garner such high levels of support. Perhaps most obviously, violent protests necessarily exclude people who abhor and fear bloodshed, whereas peaceful protesters maintain the moral high ground.

Chenoweth points out that nonviolent protests also have fewer physical barriers to participation. You do not need to be fit and healthy to engage in a strike, whereas violent campaigns tend to lean on the support of physically fit young men. And while many forms of nonviolent protests also carry serious risks – just think of China’s response in Tiananmen Square in 1989 – Chenoweth argues that nonviolent campaigns are generally easier to discuss openly, which means that news of their occurrence can reach a wider audience. Violent movements, on the other hand, require a supply of weapons, and tend to rely on more secretive underground operations that might struggle to reach the general population. 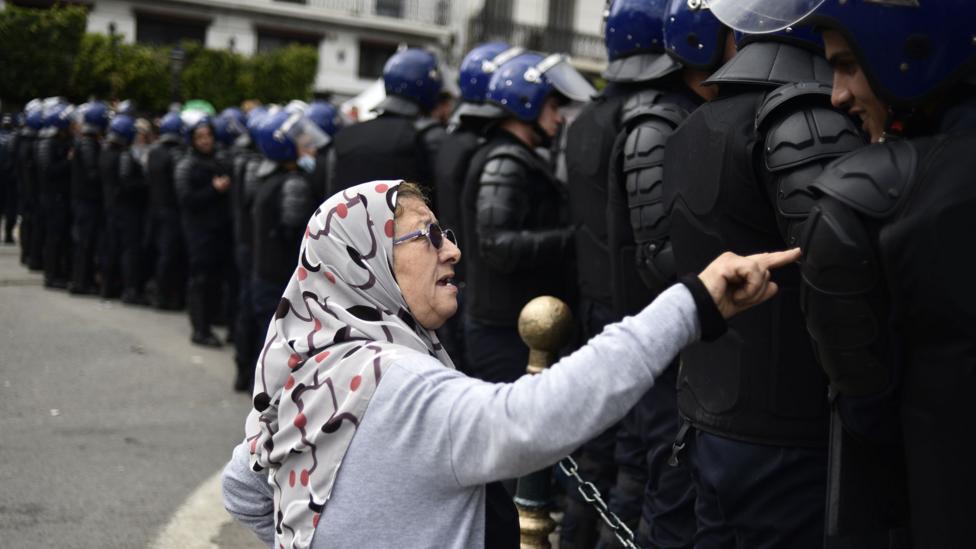 An elderly woman talks to the Algerian security forces during the recent protests (Credit: Getty Images)

By engaging broad support across the population, nonviolent campaigns are also more likely to win support among the police and the military – the very groups that the government should be leaning on to bring about order.

During a peaceful street protest of millions of people, the members of the security forces may also be more likely to fear that their family members or friends are in the crowd – meaning that they fail to crack down on the movement. “Or when they’re looking at the [sheer] numbers of people involved, they may just come to the conclusion the ship has sailed, and they don’t want to go down with the ship,” Chenoweth says.

In terms of the specific strategies that are used, general strikes “are probably one of the most powerful, if not the most powerful, single method of nonviolent resistance”, Chenoweth says. But they do come at a personal cost, whereas other forms of protest can be completely anonymous. She points to the consumer boycotts in apartheid-era South Africa, in which many black citizens refused to buy products from companies with white owners. The result was an economic crisis among the country’s white elite that contributed to the end of segregation in the early 1990s. 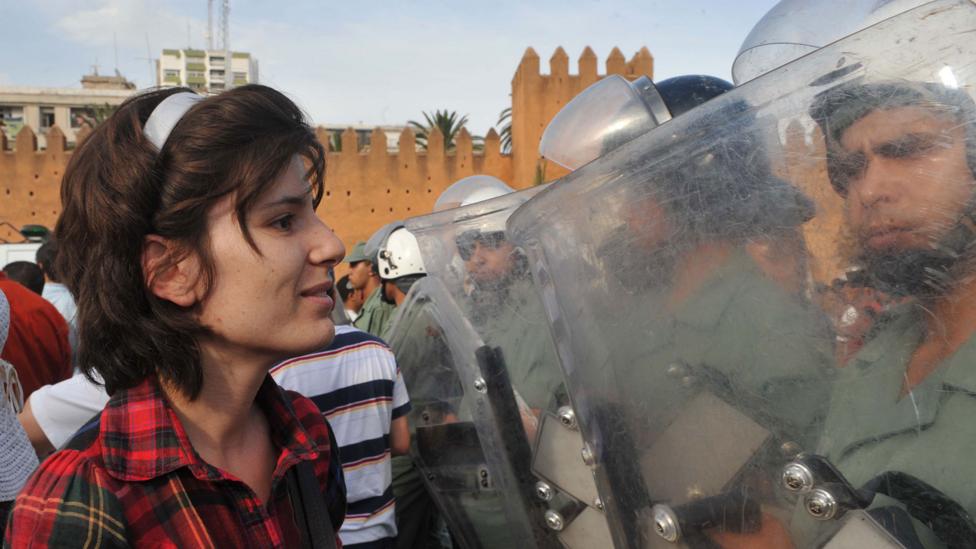 “There are more options for engaging and nonviolent resistance that don’t place people in as much physical danger, particularly as the numbers grow, compared to armed activity,” Chenoweth says. “And the techniques of nonviolent resistance are often more visible, so that it’s easier for people to find out how to participate directly, and how to coordinate their activities for maximum disruption.”

These are very general patterns, of course, and despite being twice as successful as the violent conflicts, peaceful resistance still failed 47% of the time. As Chenoweth and Stephan pointed out in their book, that’s sometimes because they never really gained enough support or momentum to “erode the power base of the adversary and maintain resilience in the face of repression”. But some relatively large nonviolent protests also failed, such as the protests against the communist party in East Germany in the 1950s, which attracted 400,000 members (around 2% of the population) at their peak, but still failed to bring about change.

In Chenoweth’s data set, it was only once the nonviolent protests had achieved that 3.5% threshold of active engagement that success seemed to be guaranteed – and raising even that level of support is no mean feat. In the UK it would amount to 2.3 million people actively engaging in a movement (roughly twice the size of Birmingham, the UK’s second largest city); in the US, it would involve 11 million citizens – more than the total population of New York City.

The fact remains, however, that nonviolent campaigns are the only reliable way of maintaining that kind of engagement. 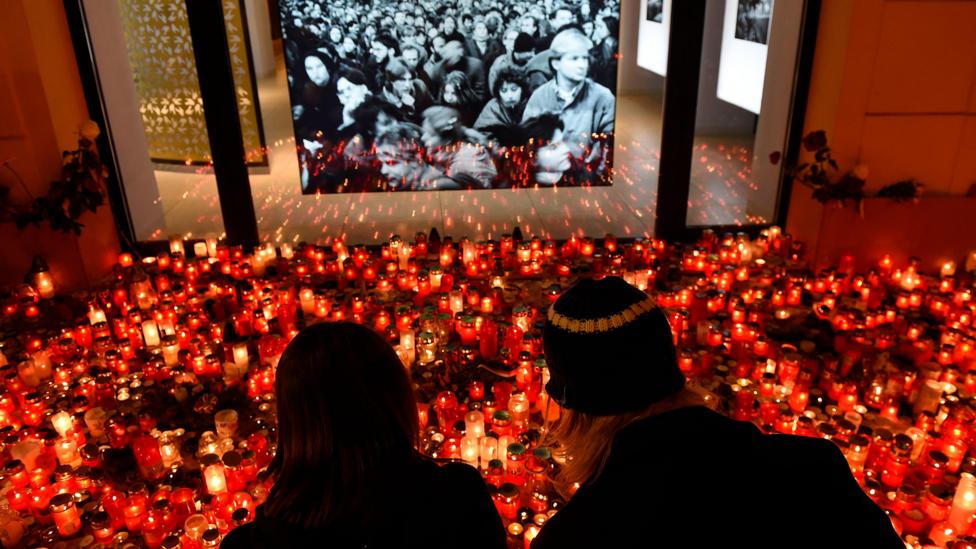 A couple commemorate the Velvet Revolution of 1989, which helped bring down Communist rule in Czechoslovakia – another example of Chenoweth’s “3.5% rule” (Credit: Getty Images)

Chenoweth and Stephan’s initial study was first published in 2011 and their findings have attracted a lot of attention since. “It’s hard to overstate how influential they have been to this body of research,” says Matthew Chandler, who researches civil resistance at the University of Notre Dame in Indiana.

Isabel Bramsen, who studies international conflict at the University of Copenhagen agrees that Chenoweth and Stephan’s results are compelling. “It’s [now] an established truth within the field that the nonviolent approaches are much more likely to succeed than violent ones,” she says.

Regarding the “3.5% rule”, she points out that while 3.5% is a small minority, such a level of active participation probably means many more people tacitly agree with the cause.

These researchers are now looking to further untangle the factors that may lead to a movement’s success or failure. Bramsen and Chandler, for instance, both emphasise the importance of unity among demonstrators.

As an example, Bramsen points to the failed uprising in Bahrain in 2011. The campaign initially engaged many protestors, but quickly split into competing factions. The resulting loss of cohesion, Bramsen thinks, ultimately prevented the movement from gaining enough momentum to bring about change.

Chenoweth’s interest has recently focused on protests closer to home – like the Black Lives Matter movement and the Women’s March in 2017. She is also interested in Extinction Rebellion, recently popularised by the involvement of the Swedish activist Greta Thunberg. “They are up against a lot of inertia,” she says. “But I think that they have an incredibly thoughtful and strategic core. And they seem to have all the right instincts about how to develop and teach through a nonviolent resistance campaigns.”

Ultimately, she would like our history books to pay greater attention to nonviolent campaigns rather than concentrating so heavily on warfare. “So many of the histories that we tell one another focus on violence – and even if it is a total disaster, we still find a way to find victories within it,” she says. Yet we tend to ignore the success of peaceful protest, she says.

“Ordinary people, all the time, are engaging in pretty heroic activities that are actually changing the way the world – and those deserve some notice and celebration as well.”